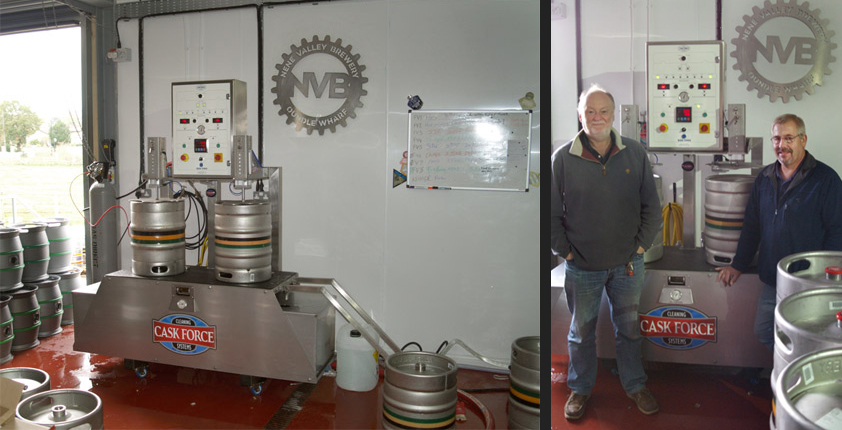 With the keg market growing in the UK many of Cask Force’s existing customer base are getting in contact and asking about the keg equipment the brand is now building and has established in the UK market over recent years, this started with the K-series dual cask and keg washers and has continued with the KEG 2000 series of washer/fillers.

The latest customer to make an enquiry was Nene Valley Brewery based in Oundle, Northamptonshire. They have been expanding their keg population and were washing; sterilising and filling 50 kegs a week by hand. This involved removing the spears washing and sterilising them independently of the keg, which was then washed on the brewery’s 200 series Cask Force cask washer, purchased in the summer of 2012. The kegs were then reassembled and filled direct from one of the brewery’s conditioning tanks.

This was slow, time consuming and inefficient, the risk of contamination also existed when the spear was removed. Considering this and with demand for their range of keg beers increasing, Dick Simpson, the brewery’s owner and founder, took the decision to invest in a keg washer filler and after doing the necessary research decided that a KEG2000 would best suit their needs.

“I would never normally buy a piece of equipment so early in its model life cycle (Nene Valley’s KEG2000 is the third to be sold) but I’ve been so pleased with the performance and reliability of the cask washer and the service that Keith and the company provide that I’ve decided it’s the machine for us. We’ve looked at other equipment but the simple, uncomplicated design, output performance and previous backup received have lead us to this decision. From what I’ve seen so far I think it has been a good choice but time will tell!”

With production forecast to rise to one hundred kegs a week, time will certainly tell on that!